Garvey’s Choice by Nikki Grimes is a short novel-in-verse that is written entirely in tanka poems.  These poems consist of five lines each, and Grimes follows the format of a 5, 7, 5, 7, 7 syllable-count for the lines of her tanka poems (English syllable count may vary as this is a Japanese poetic form).  The story itself is about a young man named Garvey who has lots of things going for him:  he’s smart and funny and a good friend, and he knows what he likes, which isn’t sports.  However, his father wants him to be a jock, and because Garvey isn’t athletic, they have no connection.  As Garvey navigates this personal minefield, he turns to food to numb the pain of rejection.  However, an opportunity to display what he is good at opens up at his school, and because he has enough courage to take the opportunity, a new world opens up for Garvey–a healthier world, first, and finally, a world of which is father can also be a part.

Garvey is a very sympathetic character, and I imagine that non-athletic kids might find much to relate to in this novel.  (Wait!  I was one, so I should know. . . if I could only remember that far back.  😉 ) Grimes’s wordsmithing shines in these short poems:

Mom’s got a talent

for origami, but she

can’t fold me into

the jock Dad wants me to be.

At least, she knows not to try.

It’s another look at a common theme in middle school literature–being who you are, not who someone else (even a parent) wants you to be.  It’s a message that never grows old because there are as many iterations of the theme as there are adolescents.  For the right reader, this book might make a difference.  (WordSong, 2016)

(This novel was shortlisted for the 2016 Cybils in the poetry category). 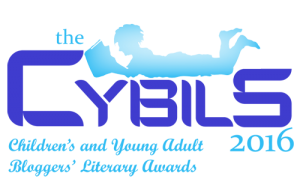