We’ve read a number of Christmas novels together as a family over the years. Some of them have been overt Christmas stories, while others of them have had Christmas as a backdrop to an unfolding plot.  Both types of books have helped our family cultivate a rich Christmas tradition of reading aloud.  These are our top five Christmas novels for family read-alouds:

Published first in McCall’s in 1971 and then expanded into a novel, Barbara Robinson’s The Best Christmas Pageant Ever is an iconic Christmas tale.   A story about the Herdmans, the family we all love to hate (or at least be repulsed and embarrassed by), not many stories get to the heart of the matter like this one.  It’s not hard to find local dramatic productions of this one, either, so that’s always nice–to follow a reading of it with a live performance.  We did that when my girls were little, and the sense of ownership they felt toward the story was almost palpable.

The Light at Tern Rock by Julia L. Sauer is

one of those stories that’s set at Christmas time.  It’s the story of a boy and his aunt whose Christmas plans are upended when they are stranded at a lighthouse.  Full of spiritual insight, this is a story that really captures the meaning of the season.   This is my pick to read aloud to the DLM, age six, this year (with the three year old Benny listening in).   If you haven’t read this Newbery honor book from the early 1950s, make this Christmas season the one you read it!

The Thirteen Days of Christmas by Jenny Overton is a very British novel about a girl, Annaple, whose father and siblings are eager to marry her off because she Mother Hens them to death at home.  They even have a prospective bridegroom.  However, the fellow isn’t quite romantic enough to suit Annaple, so her younger siblings start coaching him on how to win Annaple’s heart. The story takes place (obviously) during the thirteen days of Christmas, so (obviously) Annaple’s young man is inspired by the song “The Twelve Days of Christmas.”  When Annaple writes him a positively glowing thank you note (because she’s proper that way) for the partridge in a pear tree that he sends her on day one, he goes over the top for day two, and his gifts keep getting more and more . . . more.  🙂  By the end of the story she ends up with 364 things–various and sundry birds (including hens he sailed to France to procure), pipers, drummers, leaping lords, etc.  The chaos that ensues is quite entertaining!  This story is great fun.

A list like this really wouldn’t be complete without A Christmas Carol by Charles Dickens, would it?  I read this one aloud to my girls when they were really young–ages eight and seven.  I have to say that we all enjoyed it–even the DLM (two at the time), with his randomly pronounced bah humbugs!  Introducing younger children to the story via Mickey’s Christmas Carol

or The Muppet Christmas Carol

first before plunging into Dickens himself might pave the way for greater understanding.  Exposure to Dicken’s genius with the language is good for everyone, no matter his or her age.  🙂 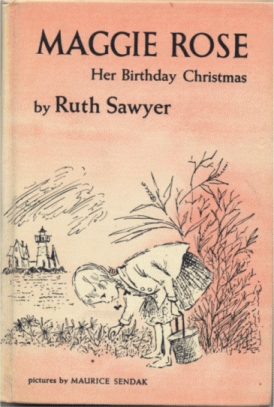 I saved my own personal favorite for last. Maggie Rose, Her Birthday Christmas

by Ruth Sawyer is truly a vintage gem.  It’s the story of Maggie Rose Bunker, one of “those Bunkers,” a large family of friendly, incorrigible riff-raff that lives on the Maine coast.  Maggie Rose is different, though–she knows her family’s not quality, like the summer people who populate the shore houses, or even like Miss Myra Moon, her teacher and confidante.  However, even though she knows her family’s different, she loves them and even both accommodates and fills in the gaps for their inadequacies.  Maggie Rose is special, just like her Christmas Eve birthday.  This year, the year of her ninth birthday, she has decided to have her own birthday celebration.  She spends all summer raising money by picking berries to sell, and she collects as many friends as she does pails of berries.  About three chapters from the end of the story the unthinkable happens, but the resolution is just as wonderful as it can be.  It’s about family and community and being able to give instead of always receiving.  Like The Best Christmas Pageant Ever, it represents the true meaning of Christmas as well as any story I’ve read.

Those are our favorites, but we’ve read others:

Do you have a favorite Christmas novel to share as a family? I’d love to hear about it!