My girls and I are in the middle of our Year of Anne, and we just finished book three, Anne of the Island.   It has been twenty-plus years since I read this one, but I had plenty of fond memories of it, and I have to say that it mostly lived up to what I remembered:  deep, meaningful friendships, in the setting of the utterly delightful Patty’s Place.   I remembered with fondness the china dogs, Gog and Magog, as well as the “globe-trotting” owners of Patty’s Place knitting their way across Egypt.  Such an image!  🙂   Reading it as a bonafide adult this time for the first time since I was married (way back seventeen years ago tomorrow!) was curious for me.  It made me a little wistful to note how often Anne said or thought, upon returning to Green Gables, how different it was for her, and how she longed to be back at Redmond.  Also, the whole Roy Gardner affair was (again) a bit much for me.  It is so remote and distant-feeling–anyone can see that Roy isn’t the man for her.   Maybe because Gilbert is such a foregone conclusion (though he wouldn’t have been at the time of publication, of course)–that part just rings a bit hollow.  The thing I love best about Montgomery’s writing–all the vignettes–is as much a part of this story as all the others, so it was an entirely enjoyable experience for me to share it with my girls.  One little bit of wisdom jumped out at me as I read this time, and I wanted to note it here for posterity.  This, from Rachel Lynde about Aunt Atossa, upon the occasion of her funeral:

“Nobody except her parents ever loved poor Atossa, not even her husband”. . . “She was his fourth wife.  He’d sort of gotten into the habit of marrying.  He only lived a few years after he married her.  The doctor said he died of dyspepsia but I shall always maintain that he died of Atossa’s tongue, that’s what.  Poor soul, she always knew everything about her neighbors, but she never was very well acquainted with herself.”

To never be acquainted with oneself is tragedy indeed.

Lastly, I have to say something about the cover of the paperback I have.  I have had this set of books since I was a young teen, so they’re over twenty-five years old.  It’s pretty special to me to be reading these to my girls.  Anyway, I think this particular cover is perfectly dreadful.  Do either of these individuals look like college-aged students?  I don’t think so.  Yes, Roy Gardner is a bit older than the typical college student, but he’s certainly NOT a middle aged man!  (And let’s not even consider that this is supposed to be Gilbert!  Eeeek!)  I definitely prefer the cover linked above. 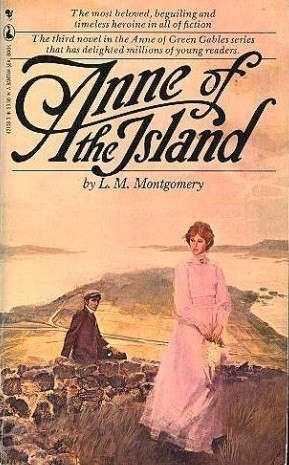