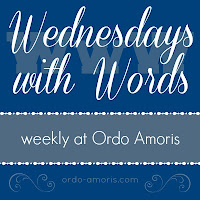 We finally finished our jaunt through The Peterkin Papers on Monday, so I should probably invest my time in writing up my full review of it.  Instead, though, I’m going to share another quote because there are just too many things that happen in this story that positively made me laugh out loud.  It’s silly, but it is so much fun!  This excerpt is from the story/chapter entitled “The Educational Breakfast”:

Mrs. Peterkin was, indeed, recovering her spirits.  She had been carrying on a brisk correspondence with Philadelphia, that she had imparted to no one, and at last she announced, as its result, that she was ready for a breakfast on educational principles.

A breakfast indeed, when it appeared!  Mrs. Peterkin had mistaken the alphabetical suggestion, and had grasped the idea that the whole alphabet must be represented at one breakfast.

Mr. Peterkin was proud and astonished.  “Excellent!” he cried.  “Every letter represented except Z.”  Mrs. Peterkin drew from her pocket a letter from the lady from Philadelphia.  “She thought you would call it X-cellent for X, and she tells us,” she read, “that if you come with a zest, you will bring the Z.”

There’s more, of course, but you’ll have to read The Peterkin Papers to appreciate the depth of their silliness.