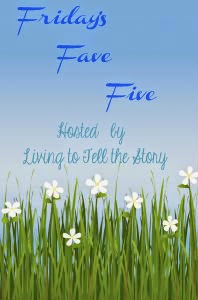 1.  Weight Watchers.  I joined WW last Friday.  My mom has been a member for a long time now and has had great success with the program.  I have lost weight by following the plan, too, years and years ago.  It’s time for some discipline in my life.  So far, so good.  I haven’t felt terribly deprived, although I’ve had to fight some cravings for things I can’t have because I don’t have *that* many points left.  I expect this to be a process.  I hope to adopt this thinking as a way of life.  I’ve tried several new recipes this week, and most have been moderately successful.  Well, they’ve been successful with Steady Eddie and me; two out of three of our kids who eat food usually won’t touch anything new or different.  {Sigh}

2. Family walks. On Monday night all six of us took a walk around the block. There’s not anything terribly unusual about this, but on this particular walk I really noticed how wonderful it is just to be together.  Yes, there was still bickering over the one scooter three kids had to share because two of them had left their at mamaw’s and papaw’s.  No, it wasn’t perfectly peaceful or relaxing or conducive to praying (my morning walks used to be like this).  I truly found joy in the moment, though, and took the time to realize this is what we’ll remember about our family life.  Sally would be proud of me.  😉  The same scene was repeated last night, only it was just me, Louise, and Benny (in the Moby wrap).  It was wonderful to just walk and converse with Louise, who rode circles around me on her scooter.  We discussed lots of things, from the sublime to the mundane.  The question of the night as we passed a couple of towering crepe myrtles:  “Are those maplewoods or dogears?”
I love my family.   🙂

3.  New interests and abilities.  The DLM has shown interest this week in building things with the various types of block-like toys we have.  This gives me hope that the upcoming school year will be a little bit easier than I have been anticipating since he’ll (maybe, maybe) be content to play alone for more than two minutes at a time.  Besides, is there anything any more endearing than a three year old rascal of a boy blossoming into an engineer?  I think not.

The DLM and his airplane

Another new development here at the House of Hope involves Lulu and a new appreciation for art.  I credit my own interest in art journaling for this.  Several times this week she has sat down at the art table or elsewhere in the schoolroom and created her own masterpieces.  I’m considering hosting some sort of little artsy group this school year, so knowing she’s growing more interested in this sort of thing is encouraging.

4.  Butterfly surprise.  Steady Eddie was cleaning up a bit before he left for work one morning when he discovered that our little butterfly habitat into which we had placed several caterpillars that came off some broccoli we got from my parents’ garden had some unexpected occupants.  I had stuck the habitat on the counter in a little closet in the schoolroom after I was convinced that the caterpillars had died.  Nope.  They had just formed tiny chrysalises, apparently. 🙂  The girls turned the two butterflies loose on our butterfly bush (which is now taller than I am!), and Louise informed me that she thinks one of them just might make it.  I love science.  🙂

5.  Benny now laughs aloud.  Is there anything any sweeter?

And a bonus since I didn’t have a list last week.  Steady Eddie, Benny, and I were out of town for most of the week last week, so on Friday the big kids, Benny, and I had some errands to run.  We went to one of our libraries late in the afternoon in time for them to shop in the summer reading program prize store.  One of Lulu’s favorite prizes to purchase with her reading tickets is an orange crush smoothie from the library’s coffee shop.  She has had a couple of them.  I think they’re good, too, though I’ve never bought one for myself.  Well, Lulu and Louise pooled their tickets (Louise contributed all of hers!) to buy me a smoothie!  That totally made my day.   Isn’t it something when your kids do something good out of the blue?  🙂

What’s up with you this week?