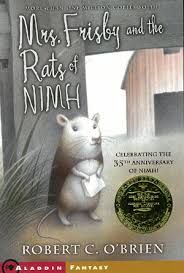 When I chose Mrs. Frisby and the Rats of  NIMH by Robert C. O’Brien to read aloud to my children, I had no idea that it was a children’s novel that carries some sort of message.  All I knew is that it won the 1972 Newbery Award and that I had never read it.  Since one of my lifelong goals is to read all the Newbery Medalists and honor books, I thought I’d kill two birds with one stone.  While there is nothing inappropriate in this book for my third and first grader, I do think this might be one to revisit it during my girls’ teen years.   What they did this time around was simply enjoy the story, which has a lot of heart despite any deeper messages one wrings from it.

Mrs. Frisby is a mouse with a problem:  she has a sick child, and their winter home is in imminent danger of being turned under by the farmer’s plow.  Timothy, her sickly one, is too weak to move, and the timing is tricky, too–springtime in their summer home would surely kill him.  Through an unusual turn of events, Mrs. Frisby ends up asking the rats of Mr. Fitzgibbon’s farm for help.  These are no ordinary rats, and the story within the larger story is theirs.  They are rats that escaped years before from a laboratory, and they had been injected with some sort of substance that made them grow in intelligence and also increased their longevity.  The rats have built their own society in tunnels under a rosebush at Mr. Fitzgibbon’s farm.  These highly intelligent rats help Mrs. Frisby with her problem, and in turn, Mrs. Frisby is able to help them.  The story has a bittersweet ending.  O’Brien does a fantastic job of making the animals come to life, and it’s easy to see why this one was chosen as the 1972 Newbery Medalist.

Of course, as I already mentioned, there seems to be more to this story than meets the eye.  O’Brien brings up several philosophical ideas that are (perhaps?) obvious to those over the age of fifteen.  The one that strikes me the most is the conflict between two of the rats over their own nature–should they steal from Farmer Fitzgibbon in order to survive, or should they devise their own means of survival?  The argument in favor of stealing is that rats have always stolen to survive; those against it think surely they’ve reached a higher level of development that would prevent them from stooping so low as to steal–plus, stealing, even if they looked at it more as taking Fitzgibbon’s leftovers,  would make them less than self-sufficient.  Obviously, these rats are very sophisticated, and their conversations about these weighty topics are erudite and articulate.  My take-away from their conversations has something to do with a Nanny State and the effects of living on government handouts, but I don’t know if that was necessarily O’Brien’s intention.  I was interested to learn that this novel is a high school selection in the Sonlight curriculum.  I can definitely see why, but again, my girls really enjoyed the story without knowing anything about the politics behind it. This is one of those books children can enjoy now and then enjoy later (or hate, depending on the particular child’s appreciation for literary analysis 😉 ).

What is your family enjoying these days?