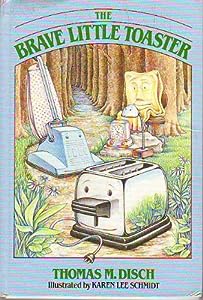 I picked up The Brave Little Toaster by Thomas M. Disch at the library because it’s a story I’d heard of and I was looking for a short chapter book to read aloud while waiting on DLM #2 to finally arrive.  While it isn’t a true chapter book (there are no chapter designations), it’s long enough that it took us several short read-aloud sessions to finish.  (As a side note, does it drive anyone else nuts that such books don’t have chapter designations?  Why don’t they, especially when they simply have huge breaks in the page layout instead?  Chapters would make them so much easier to read!)  To be honest, I’ve read other stories I enjoyed more.  However, my girls enjoyed it, and they were never satisfied with where I stopped reading–they always wanted more.  (I’m really beginning to suspect this particular reaction as a sign of anything other than the fact that they love to be read to. ;- ) )

The Brave Little Toaster is the story of five appliances–a toaster, a Tensor lamp, a Hoover vacuum cleaner, an electric blanket, and a alarm clock/radio–that leave their home, a cabin in the woods, in search of their master’s city home.  They show all sorts of ingenuity and teamwork in order to finally reach his home, and they meet a few characters along the way.  Although they don’t exactly get what they set out for, the story does have a happy ending.

If you can get past the fact that it’s an adventure story involving household appliances, it is a fun read.  Actually, when it’s all said and done, I think the fact that it’s about household appliances makes the story a bit more appealing, at least from a teaching standpoint.  The story is a great model of personification, and the characters even have depth and development.  (Now, mind you, I haven’t mentioned this at all to my girls, but I’m thinking like a former public school teacher here.)  Another plus of this story is that it uses fairly sophisticated vocabulary and sentence structure, so the listeners really have to pay attention to follow it.  There’s even a bit of random philosophizing by the author:

And what a long and weary way it was!  The forest stretched on seemingly forever with the most monotonous predictability, each tree just like the next–trunk, branches, leaves; trunk, branches, leaves.  Of course a tree would’ve taken a different view of the matter.  We all tend to see the way others are alike and how we differ, and it’s probably just as well that we do, since that prevents a great deal of confusion.  But perhaps we should remind ourselves from time to time that ours is a very partial view, and that the world is full of a great deal more variety than we ever manage to take in.

An original1980 publication date makes the characters in this story foreign to today’s child, I would guess, so there’s also the fun little walk down memory lane it forces its reader to take.  Really, there’s much to commend this short story, especially if you’re looking for a short, light read, as I was.

I know there’s an animated movie that was made from this book which I thought would be fun to show the girls, but alas, I’ve been unable to locate it.  I’ve found a couple of sequels, but not the original.  Maybe someday we’ll run across it.