Of all of L.M. Montgomery‘s works, the Emily books are the ones with which I am most familiar.  I guess this is the fourth time or so that I’ve read Emily of New Moon, and unlike certain others of her works, it doesn’t suffer much in the re-reading.  Several years ago I wrote a critical paper about the Emily books, and I wish I could put my hands on it at the present moment.  That was many children and several computers ago, alas.  🙂 However, due to my familiarity with it, I’m afraid that my thoughts here might be of the spoiler-ish variety because I tend to consider parts of her story in light of things that happen later.  I offer that as a fair warning if you don’t want to know what happens in later books.

Emily is often considered a darker version of Anne, or something like that.  Of course, anyone who’s familiar with Montgomery‘s works at all knows that most of them, at least the ones about children, follow a certain pattern:  an orphaned girl or a pseudo-orphaned girl (due to illness of a parent, etc.) finds love, acceptance, and comes into her creative birthright through the trials and tribulations she faces while growing up under the guidance of people who don’t always understand her.  Of course, each character also has adults who love her and accept her for who she is:  Anne has Matthew; Pat has Judy Plum; etc.  After going to her mother’s people at New Moon after her father dies, Emily finds a kindred spirit (to quote Anne) in Cousin Jimmy, a sometimes-champion in Aunt Laura, and a hard-won supporter in Aunt Elizabeth, though this relationship is definitely not without its hard, hard moments.  Like all of Montgomery‘s novels, there are eccentric characters aplenty in the Emily books, as well as a love of nature and home. What’s not to love?

Ah. . . Dean Priest.  Dean Priest.  Dean Priest.  What to make of him?  I’m afraid my twenty-first century sensibilities have perhaps ruined it for me, but it’s just so hard to swallow a man in his thirties without nefarious intentions being so enamored of a preteen.  In fact, I guess you could say that his intentions aren’t really hidden–for example, he refuses to accept a familial kiss from her as she leaves Blair Water, holding out instead for a first kiss of a more significant sort.  Montgomery has at this point, of course, begun to establish Emily as a genius–a writer, and the argument is that without Dean Priest’s influence, perhaps she might never come into her full creative power.   Emily’s opinion of him is all positive:

She was always at her best with him, with a delightful feeling of being understood. (273)

He is odd–a cynic, an intellectual, and an educated man who has money and travels.  Still, I just have a hard time swallowing the whole relationship.  There is no way under the sun I’d let my twelve year old daughter hang out with a thirty-something year old man, even if he was some sort of distant relative-by-marriage.  Even if he was really smart.  Even if he had lots of money.  Honestly, I’ve never liked him. Even when I read this trilogy as a young teen myself, I found him a bit on the creepy side.

There are plenty of things about the story to like, though, Dean Priest notwithstanding.   My favorite parts are the bits with the merry quartet of friends:  Emily, Ilse Burnley, Teddy Kent, and Perry Miller.  Ilse, poor, neglected Ilse, has always been one of my favorite Montgomery characters.  I love her snap and vigor.  I love her appearance.  I love her vocabulary.  🙂  She calls Emily a  “puling, sniveling chit” and a “proud, stuck-up, conceited, top-lofty biped” (118) when they have their first fight, and you’ve got to love a girl with an arsenal equipped with words like that.  😉  She is smart and proud and vulnerable, and I just love her.  Teddy Kent is a bit too perfect, maybe, but it’s obvious that Montgomery is setting up something between him and Emily, so it’s interesting.  And Perry Miller, well, could he there be a more interesting character to turn the staid existence at New Moon on its ear?  Of course, he gets his own sort of redemption, thanks to the fact that he, too, is a genius.  Montgomery has created a quartet of exceptional children and put them all together in a little village on Prince Edward Island; how can we not expect things to get complicated as they grow into their teen years?

That’s the other thing I noticed this time around.  Maybe it’s true for all of Montgomery‘s stories and I just noticed it this time, but she does an awful lot of setting up of things in this first story.  We expect something to happen with Dean Priest; we expect something to happen with Teddy Kent.  How can it not?  Although we tend to (maybe?) think of most of Montgomery‘s books as children’s stories, really, they’re not.  There’s such a subtle undercurrent of adult feelings and emotions and intentions throughout many of them, or at least the ones I’ve read this time around.  I think it’s particularly true of the Emily stories. Perhaps that, as well as a host of other things, contribute to Montgomery‘s enduring popularity even among adults.  I also think it’s one of the reasons I can’t figure out quite when to introduce my girls to Montgomery.

That copy up there of Emily of New Moon isn’t the one I have.   I have the old Bantam paperback boxed set of the Emily books, which is pictured second below.  According to Wikipedia, the one immediately below is the first edition.  Isn’t it lovely?  Still, I’ve come to think of Emily as the girl in the windowseat, writing away with Saucy Sal or Daffy or some cat by her side. 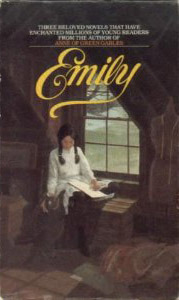 I’m really glad I read Emily this time around, and I only wish I had time to read the second and third books in quick succession.  Since Les Miserables and the Armchair Cybils took up most of my January, I’ll have to content myself with book one this year and wait for next year to pick up Emily’s story again.  I would like to watch the Emily movie, and I’m pretty sure at least one local library has it.  Maybe I’ll do that soon.

I’ve enjoyed participating in the L.M. Montgomery Reading Challenge since Carrie first started it several years ago.  This is a list of links to all my posts:

Kilmeny of the Orchard review

PEI Reminscences, a post in which I share pictures and memories of mine and Steady Eddie’s honeymoon on the Island

L.M. Montgomery Meanderings, a post in which I reminisce about how I became such a fan

Something by L.M. Montgomery also happens to be the January 2013 Reading to Know Bookclub selection, so it’s a two-for-the-price-of-one deal!  🙂

Thanks, Carrie, for encouraging me to revisit a beloved author every January!