I just closed the covers of A Tangled Web with a satisfied thump, and while I am not ready to tackle anything else by L.M. Montgomery right now, I am glad I re-read this one.  A Tangled Web capitalizes on the thing I like most about L.M. Montgomery’s style of writing–that she can create and weave together a community of people, with all their fits and foibles, all the while maintaining a cohesive storyline.  There really isn’t a main character in A Tangled Web, unless you count Aunt Becky Dark’s jug, the want of which has upended the lives of many a Dark and Penhallow.  Instead we have the stories of various members of the two clans and how their lives have played out thus far, and how the legendary jug affects them.  There are love triangles a-plenty in this story, with engagements made and broken, as well as the re-union of an estranged married couple who have lived separate and tortured lives for a decade.  There are silly men and cantankerous women, a neglected child and enough rhapsodizing about wonderful houses to make any prosaically-minded person to wonder, “What’s wrong with me that I don’t feel exactly this way about my house?  I mean, it’s nice, but sheesh!”  There are also lots and lots of four-letter words, mostly damns, to the point that it becomes a point of the book–that some of the men have to give up cursing so as to stay on the good side of the departed Aunt Becky who gave hints as to the habits of a person who would not get the jug when it is finally awarded to someone.  (I remember reading somewhere that Montgomery wrote this book for an adult audience, so maybe that explains her decision to use so many expletives.)

Anyway, it’s an enjoyable story.  I almost feel like this time around I’m reading the L.M. Montgomery books through a new set of more mature glasses.  Now I’m far more likely to grow weary of all the high-flown descriptions and passions described in any of her stories.  I think I can almost forgive all of that in a character like Anne, whose imagination really does get the better of her, but A Tangled Web is peopled almost entirely by adults, with the exception of the aforementioned neglected child, whose story really is almost too much, even by Montgomery‘s standards.  This is definitely the type of book that is read for entertainment and not for any particular message or meaning, unless you count the juxtaposition of the absurdity and the beauty of life as a meaning or message.  Once again, I’m reminded of Gilbert’s empassioned expression to Anne concerning the novel she was writing:  “Anne, nob’dy speaks that way!”  Ain’t it the truth.

One thing I’m picking up on more and more in the Montgomery novels I’ve re-read over the past few years is the atmosphere of darkness (sadness?  pessimism?)  that seems to pervade much of philosophical underpinnings of her works.  Maybe it’s just me, and really, it’s more of a feeling than anything, but there it is.  Carrie discusses Montgomery and theology a bit in this post, and while I’ve never entertained the delusion that any particular classic author’s works are “Christian” just because they’re moral or what-have-you, I think perhaps our differing thoughts on God might account for the uneasiness I feel at times when reading Montgomery‘s books.  (It’s not really uneasiness, but more of a, well, creepy feeling.)  I cannot believe I’m saying this about the author who used to be number one on my list of favorites!

One more thing I wanted to note about A Tangled Web:  I usually prefer an older-looking cover for an old book; in other words, usually I’d prefer the cover linked above over the one pictured below for a book first published in 1931.  However, in the case of this book, I think the cover above makes it look to somber and serious.  The color cover below bespeaks the drama and sheer absurdity of the story better to me than the serious-appearing young lady above.  The one below also happens to be the copy I own (but have misplaced, which is sad to me because I’ve had an almost-complete Montgomery collection since I was a teen). 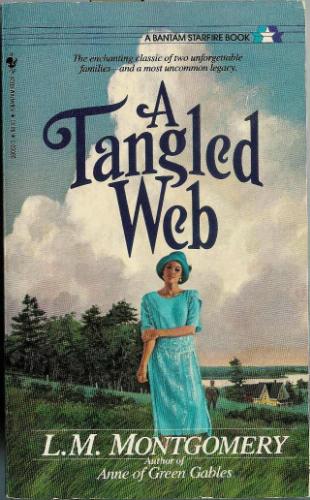 I’m really beginning to think my L.M. Montgomery Fan Club membership is going to be revoked if I don’t quit nit-picking!  😉   I really think I need to get back to reading the books with children as the main characters; I find much of what I’ve criticized about A Tangled Web much easier to take in a tale about people under the age of fifteen.  🙂

And so ends another month with the L.M. Montgomery Reading Challenge.  Many thanks to Carrie for encouraging us to dust off our old copies of these beloved favorites and give them another look.  This is my fourth year to participate in the challenge, so I’m building up a nice little collection of reviews and other thoughts I’ve shared here, if anyone is interested in even more waffling on my part about L.M. Montgomery and my devotion to her ;-).  (Read the honeymoon post if you’ve any doubt as to where I really stand.)

Kilmeny of the Orchard review

PEI Reminscences, a post in which I share pictures and memories of mine and Steady Eddie’s honeymoon on the Island

L.M. Montgomery Meanderings, a post in which I reminisce about how I became such a fan